This section is dedicated to all the fire apparatus which has provided fire protection to the Penfield community since its inception.

As far back as 1841 the fire company's first piece of firefighting equipment came from the City of Rochester.

It was Rochester's second hand pumper named engine 2 which sat at the Main Street East Firehouse across from the Blossom hotel.  It would become known as Old Betsy to the town of Penfield.  It was an 1827 Gooseneck engine which would serve Penfield for 25 years before being destroyed under extremely strange circumstances at the Lawless Paper Mill.  A chimney was blown over in a November wind storm and crushed it while it was located on the second floor of the mill at the time, why it was on the second floor of this mill is a also a great mystery as it should have been in it's engine house on Mott's Lane.

A hand pumper named Corinne (1887 - 1921's) would serve the town next.  It is believed to be from the Seneca Falls area. This hand pumper appears to have been possibly built in 1870 which would have made it 17 years old at the time Penfield purchased it.  Corinne still exists today displayed in our front window.

Two hose carts and a ladder wagon were purchased in 1910 to assist Corinne.  It was at this time the Penfield Water District was formed, the fire station was purchased,  and hydrants were put in.   The ladder wagon and one hose cart still exist today and can also been seen in our front windows with Corinne.  The other hose cart was lost in a fire years ago, ironically in a fireman's exempt hall.

The very first motorized piece of equipment came from F.E. Ockenden who had donated a  Hudson passenger car to the fire company in 1921.  The Hudson car was placed on a train and sent down to Brooklyn to be outfitted with chemical tanks. It served the community for about 7 or 8 years till the La France was purchased.  There are no known pictures of the Hudson available.  (1921-1929)

The 1929 American LaFrance was built in Elmira , NY and delivered just as the great depression was starting in the fall of 1929.  This would be Penfield's first fire truck purchased from an actual fire truck manufacture  The American La France was given the number 75 in 1952 when a radio was finally installed.  It has a 500 gpm pump with a 100 gallon tank of water.  It was the first truck to be numbered 75 and considered the second fire truck to operate in the  Penfield community.  1929 - 1957

For the most part the truck hasn't changed much since its purchase.  The one item that wasn't original is the spot light, that actually came from the Chevy Chemical Truck before it was sold.

The 1930 Chevy was actually a chemical truck with 2 large tanks in the back where the soda acid would be added to pressurize the system.  Sometime later the chemical tanks would be removed and a tank and pump would be added.  Most of the work was done in house.  1930 Chevy Chemical Truck 1930 - 1957.  75 Gallon per minute pump with a 100 gallon tank added in 1934.  No number assigned, 3rd truck owned. It was sold to Farmington NY fully loaded with equipment for 45 dollars at the time.  It was required in the early 2000s from a farmer who was using it out in the Rush, NY area.

The fire company owned an ambulance prior to the ambulance corp forming there own entity.  This is the only known picture of the ambulance.  It was the 4th piece of apparatus owned.  Also to if you look at the picture on the left side, one of the very few pictures of the old station where the trucks were kept in basement of the school house.  The LaFrance and the Chevy trucks were squeezed in the small space with only a single access door while the ambulance was stored in a truck bay built where the dinning room used to be. 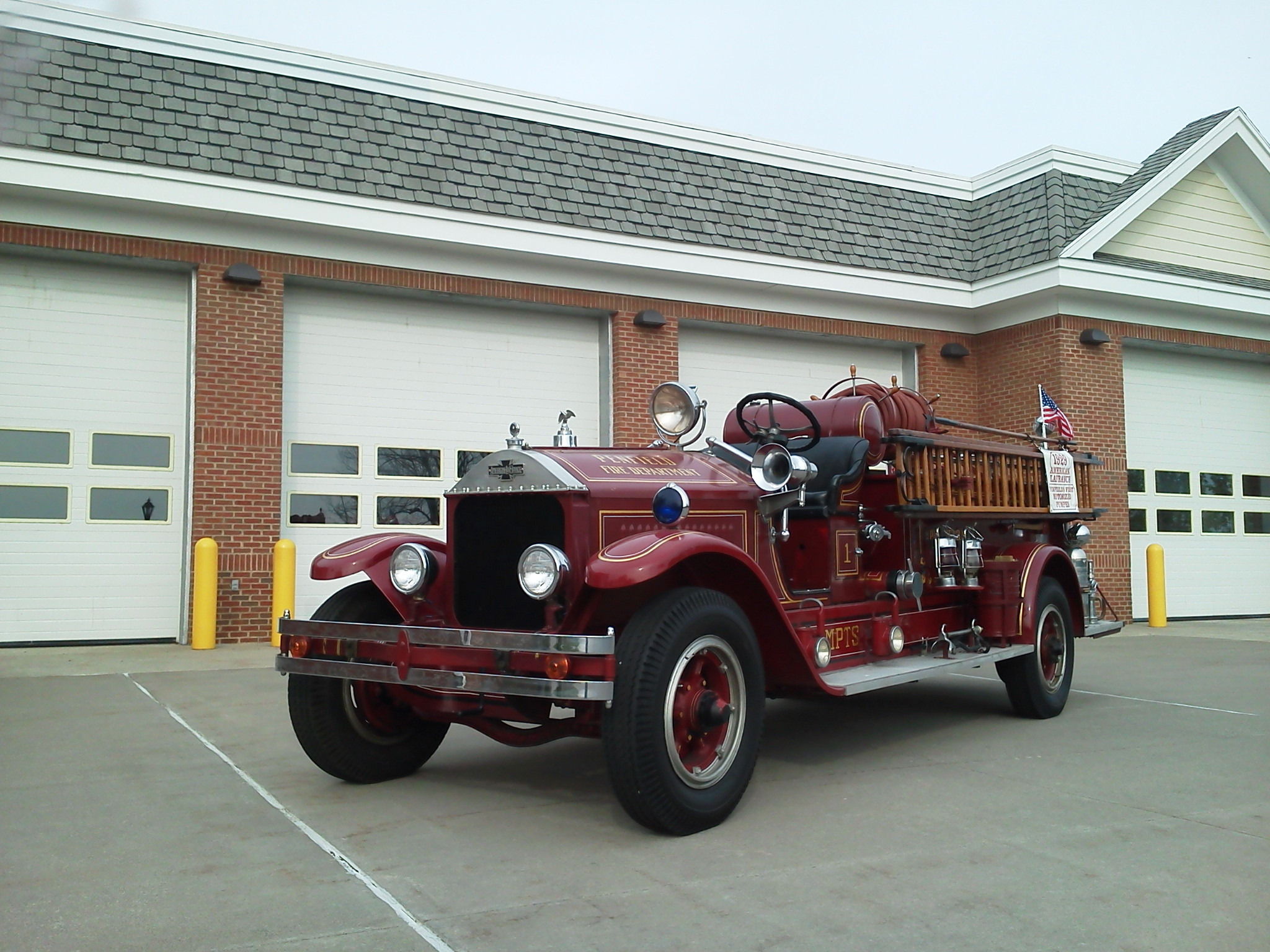 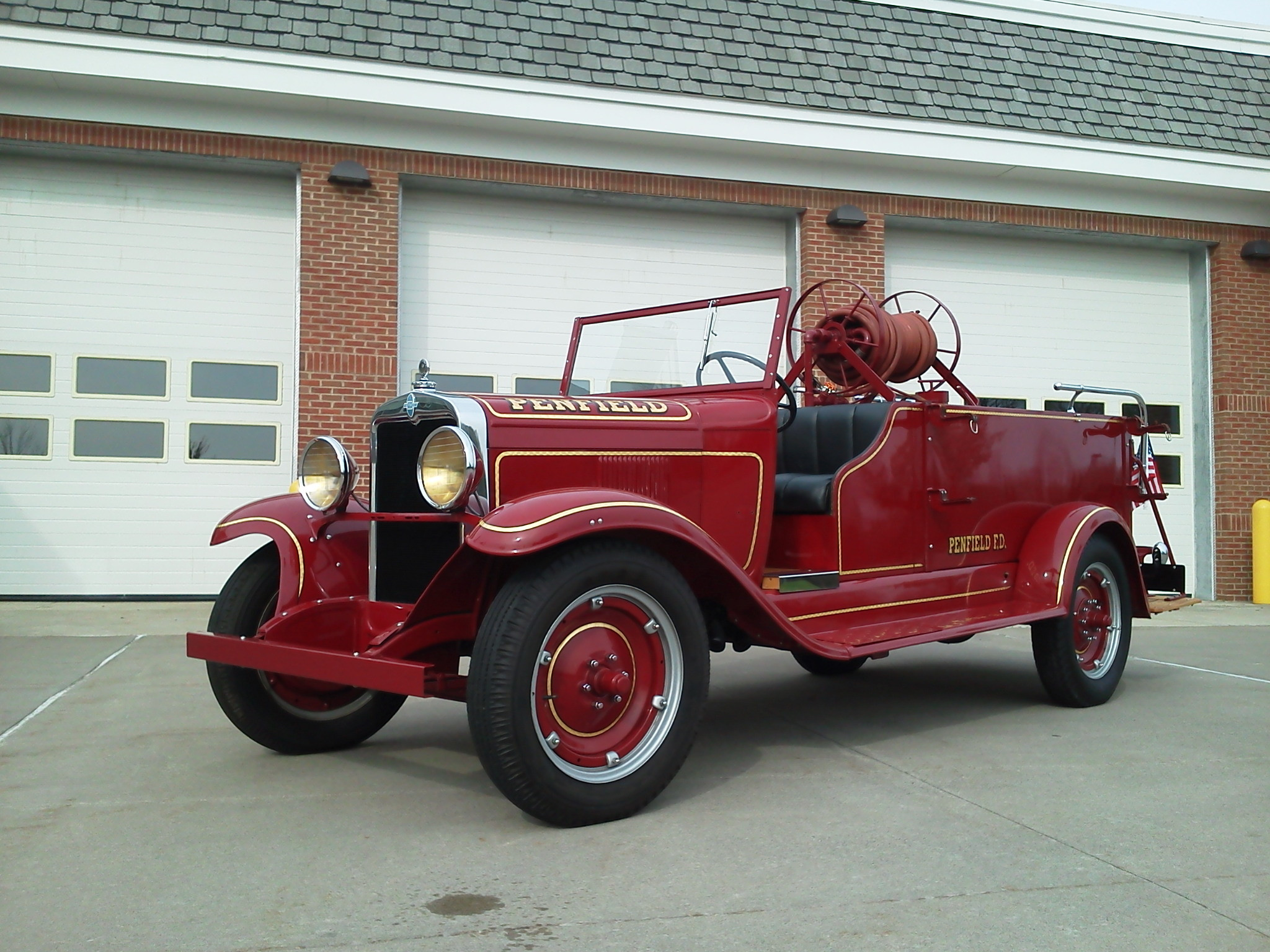 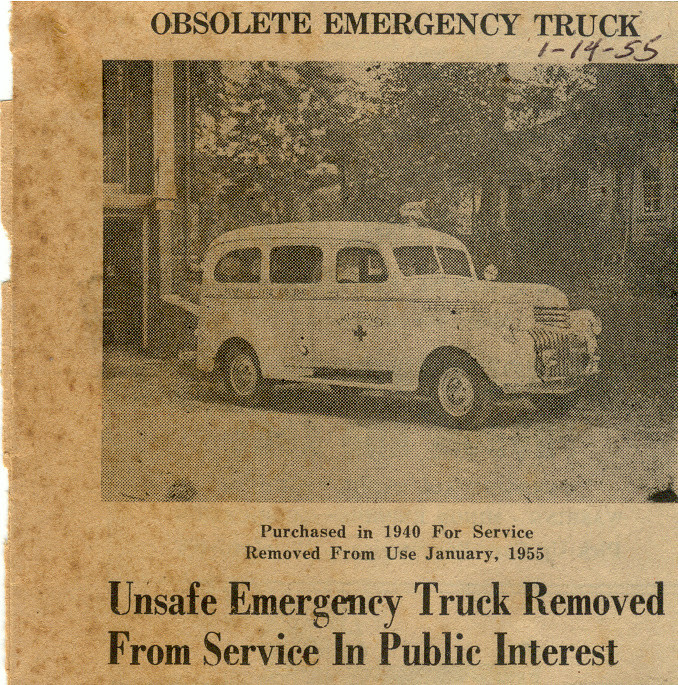 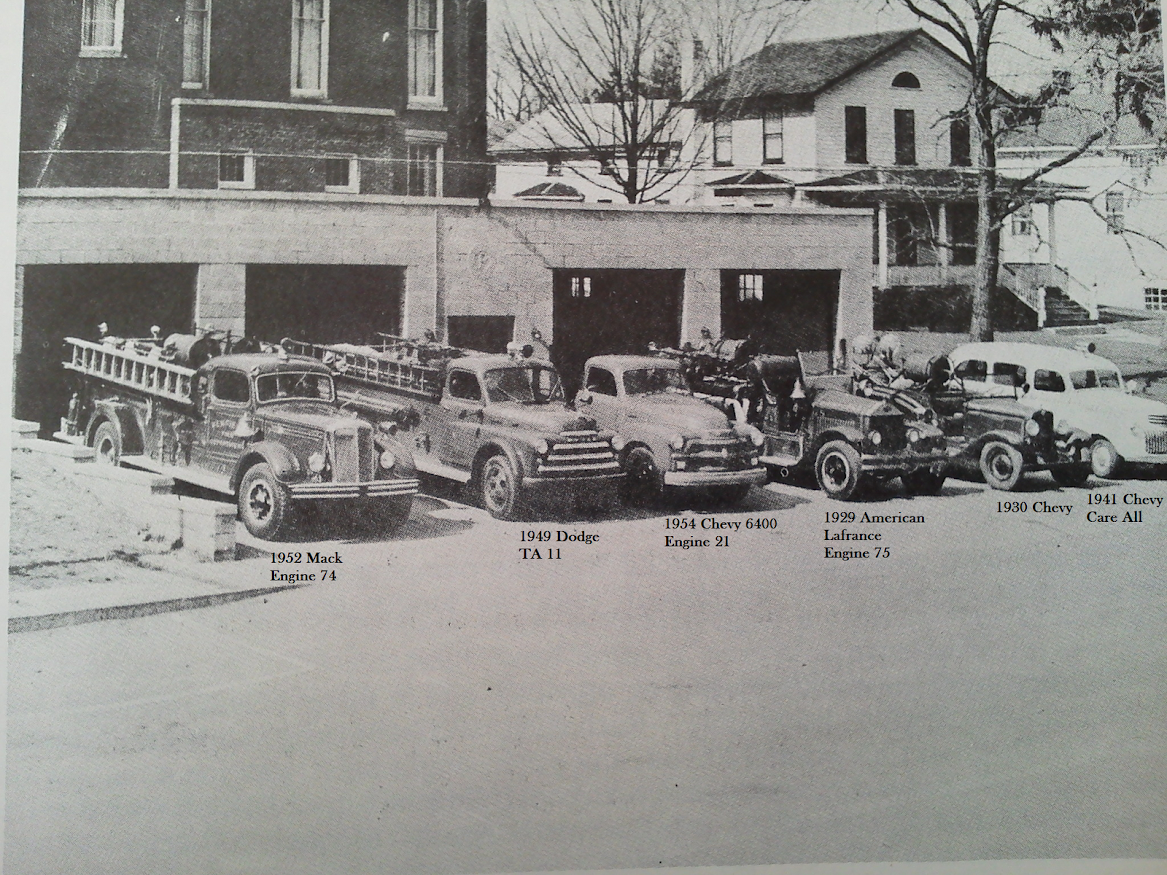 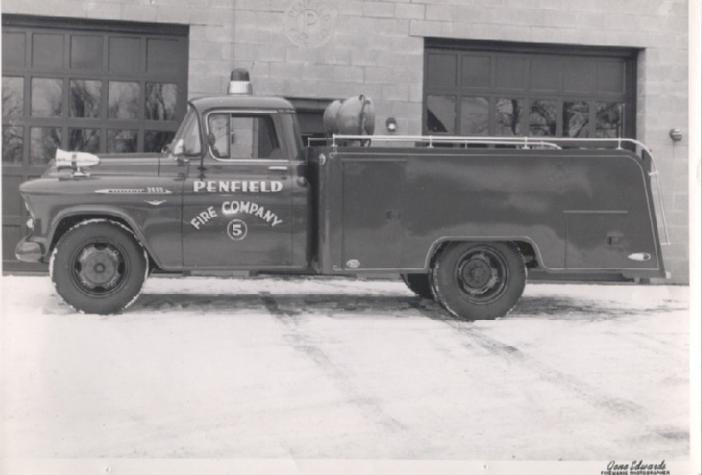 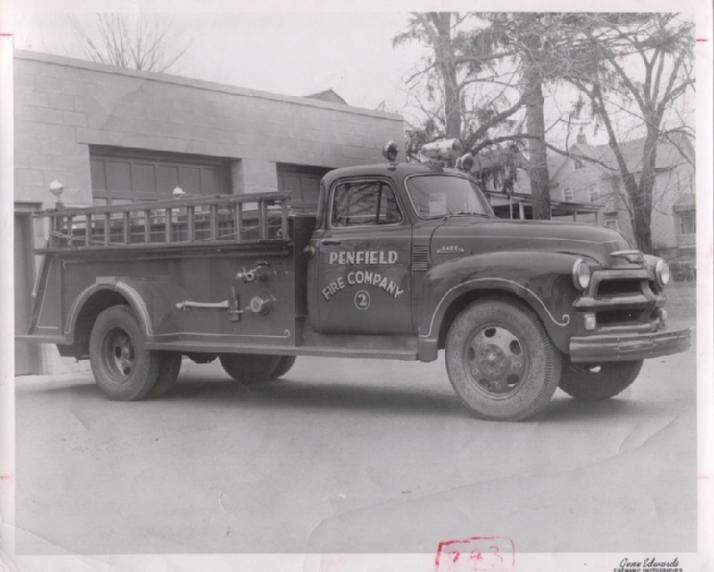 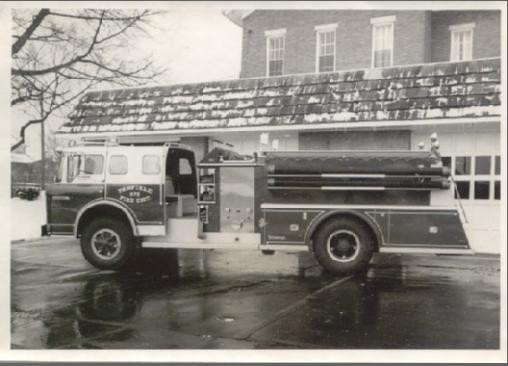 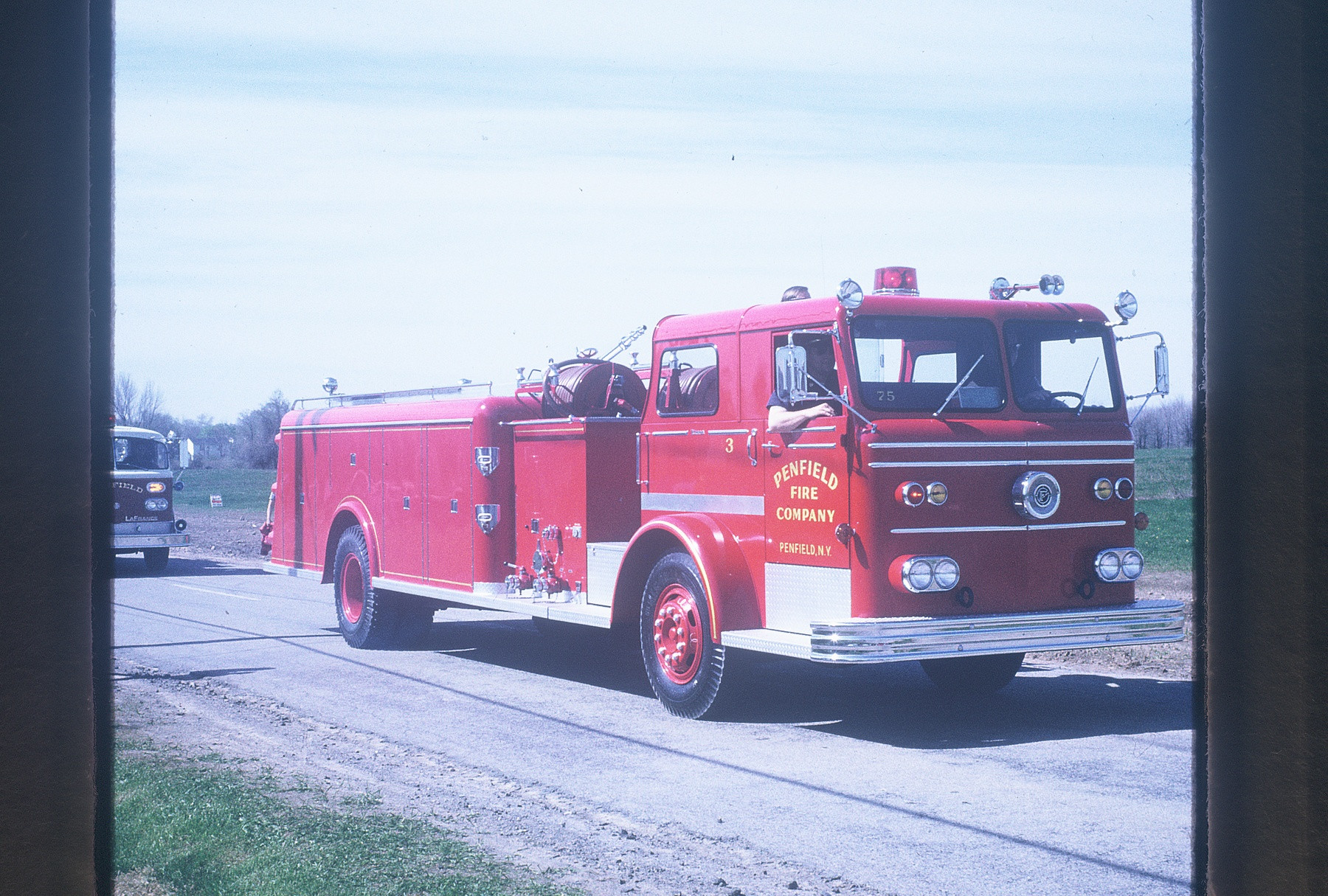 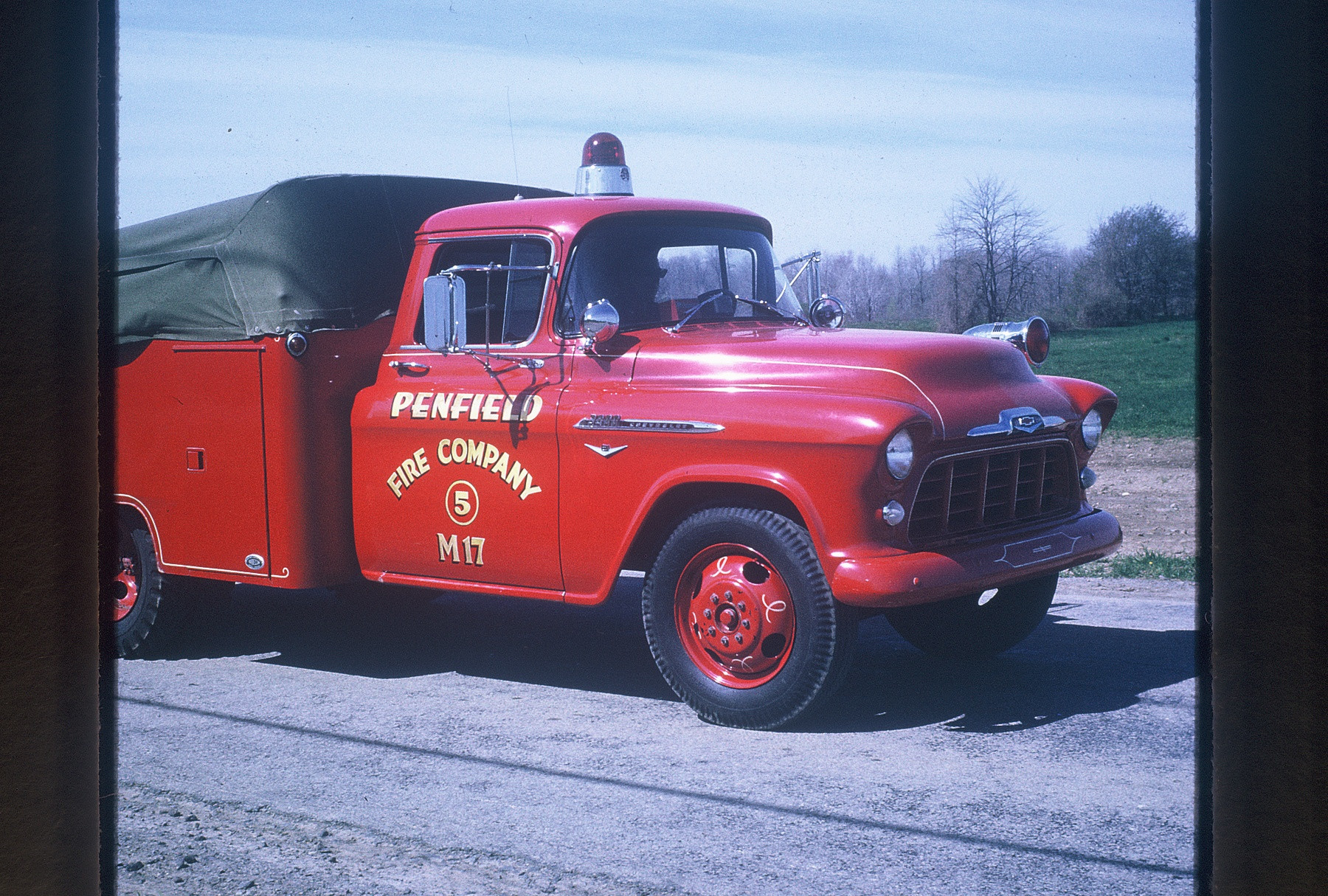 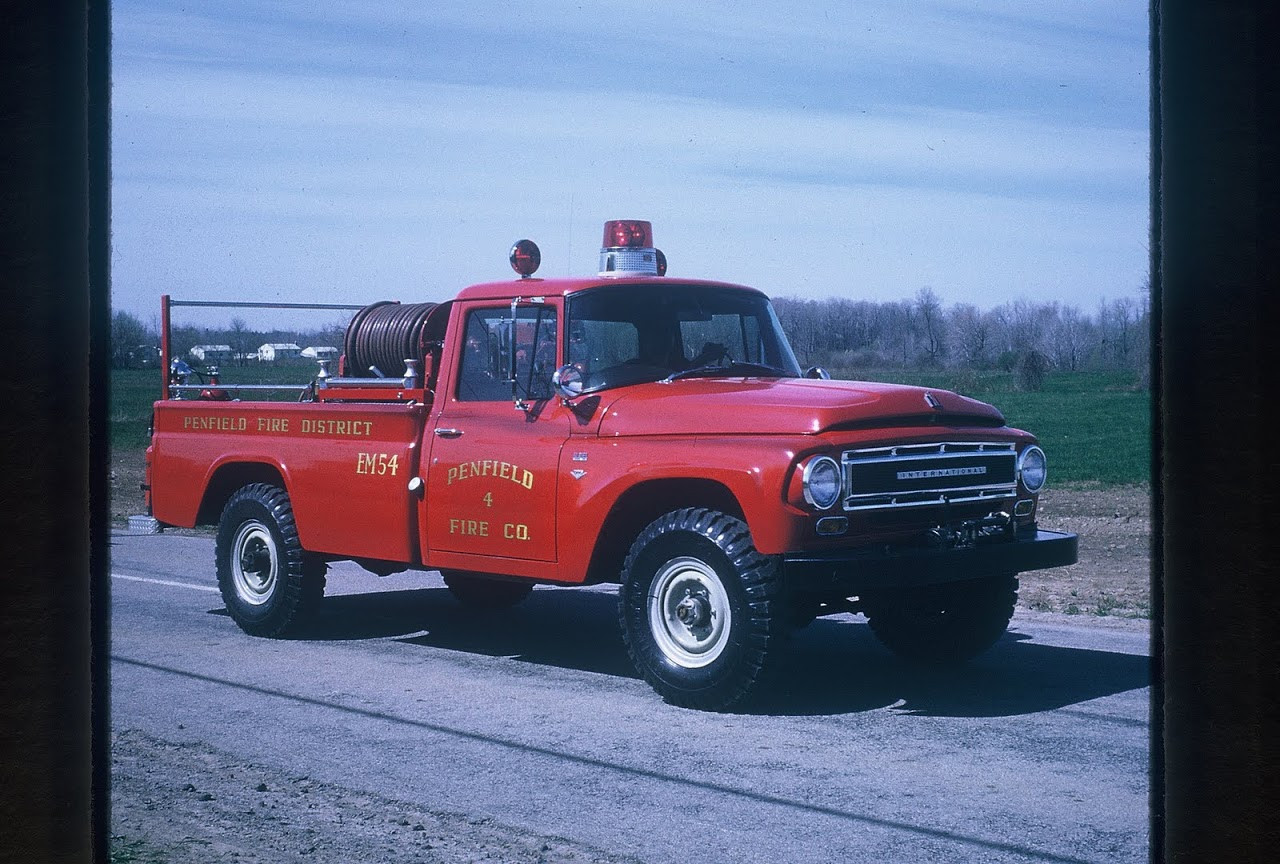 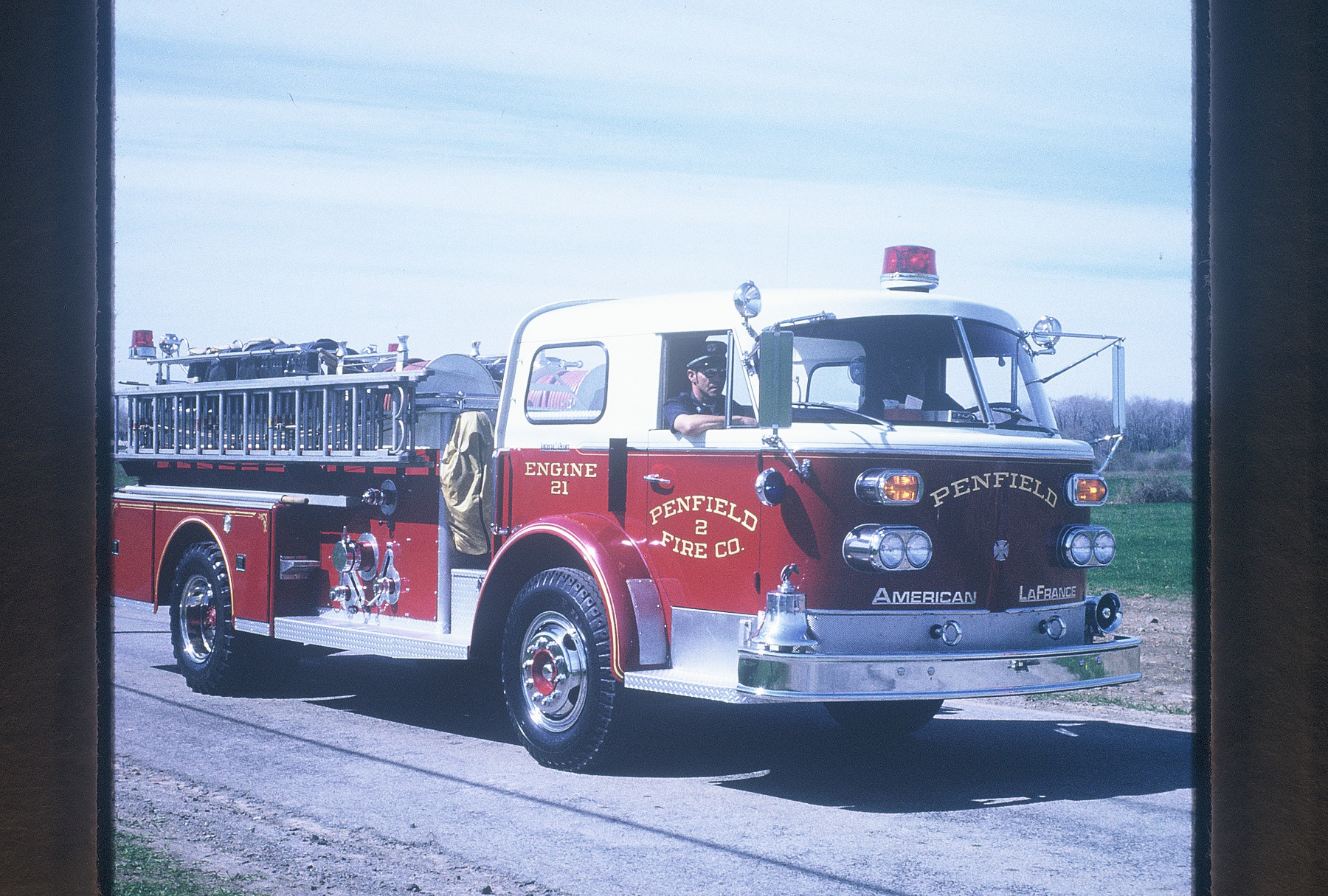 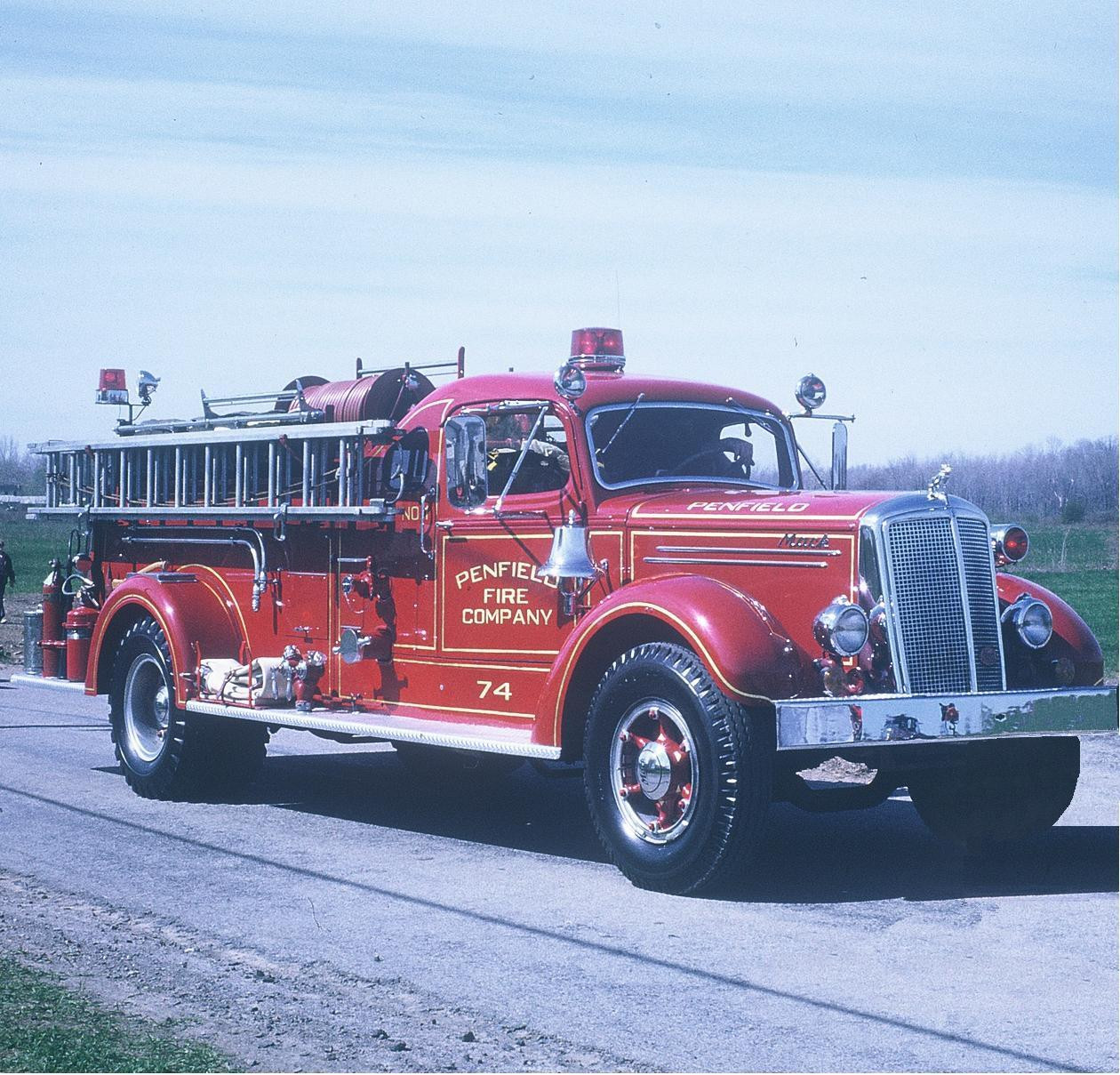 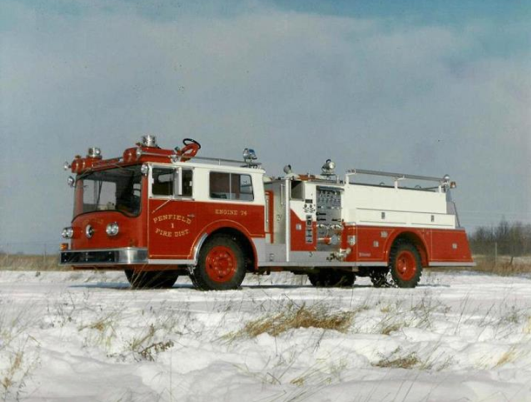 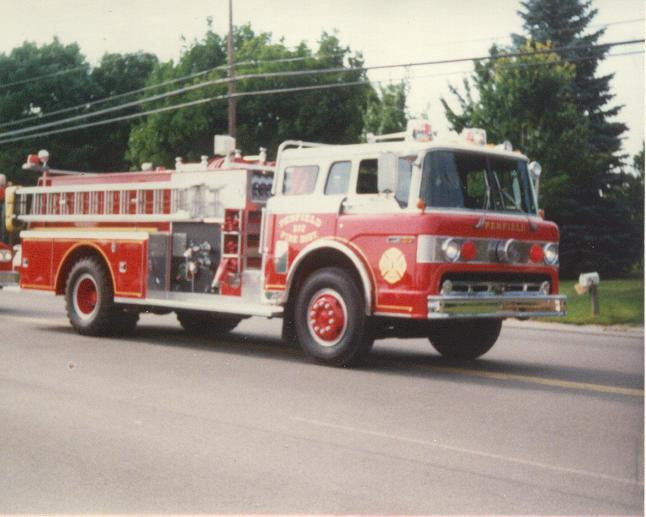 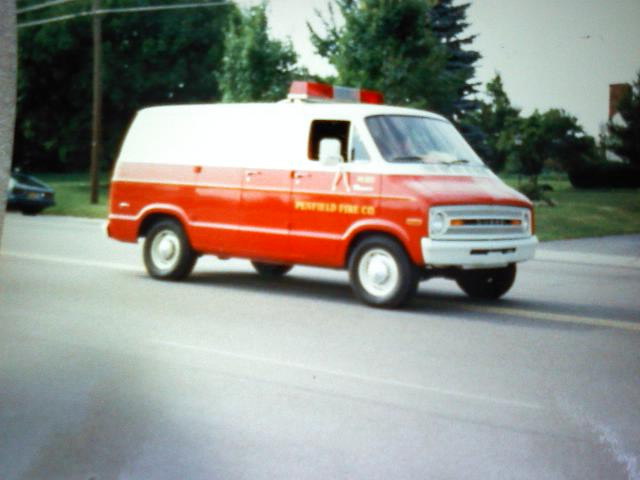 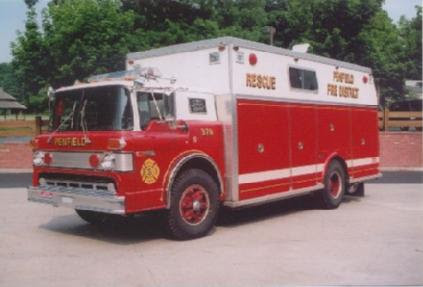 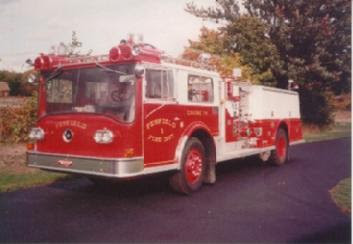 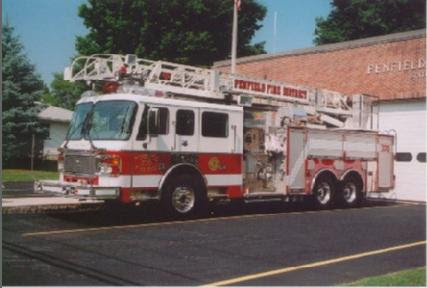 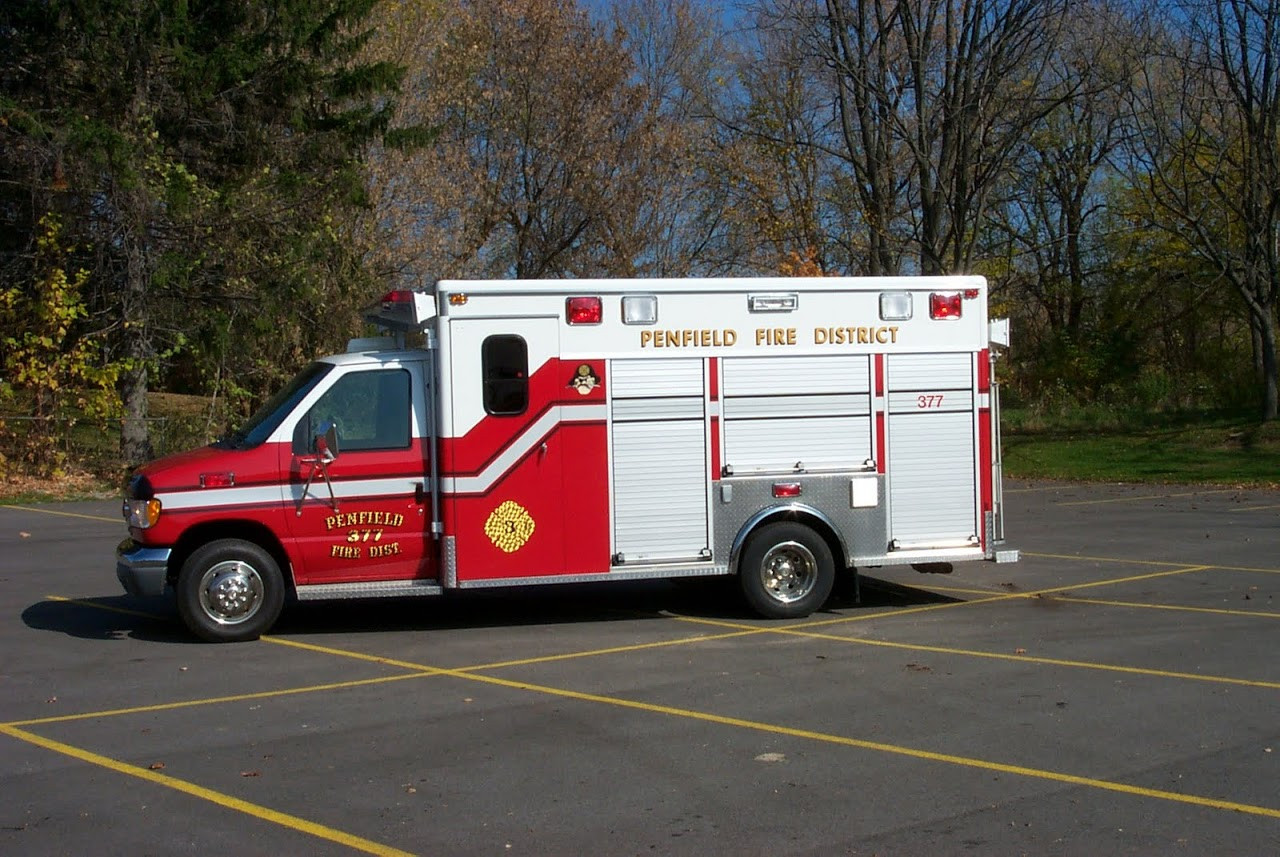 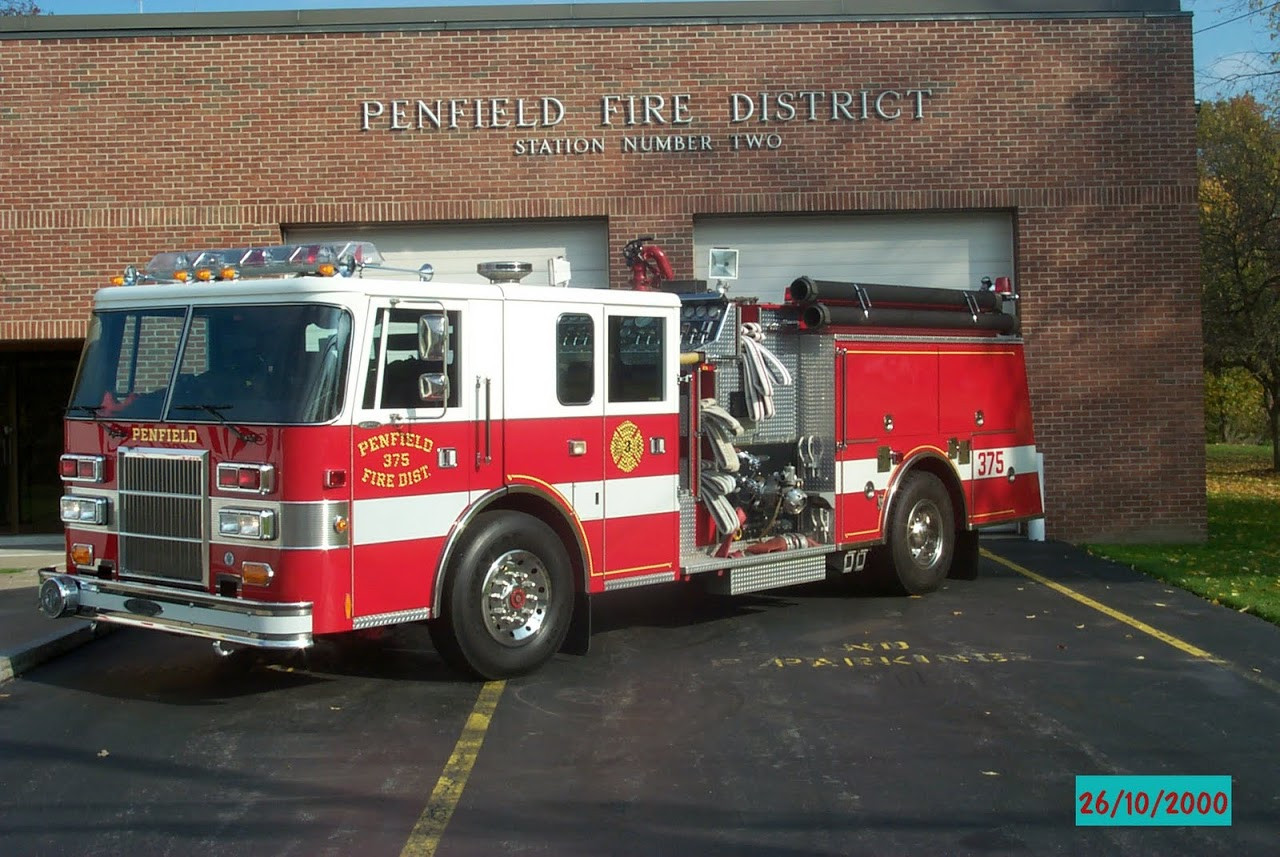 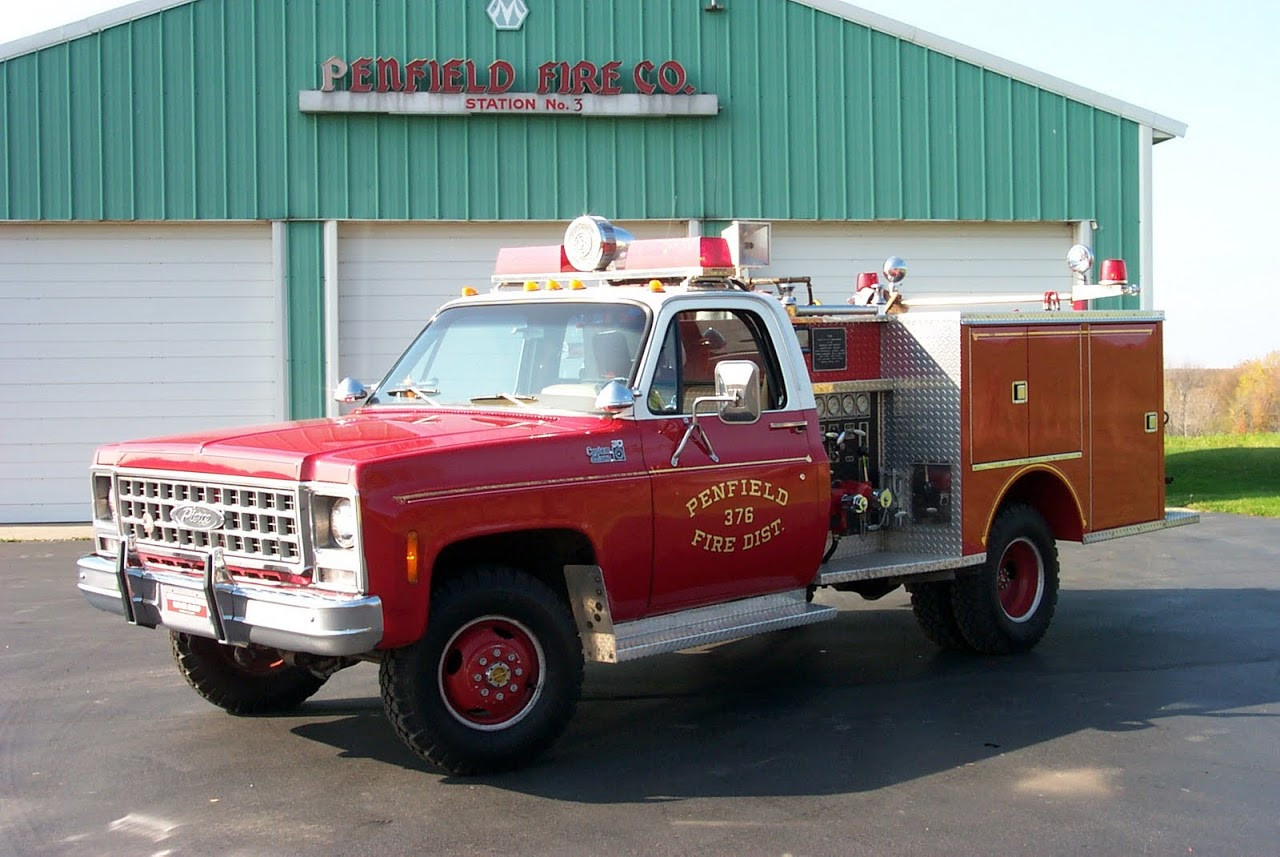 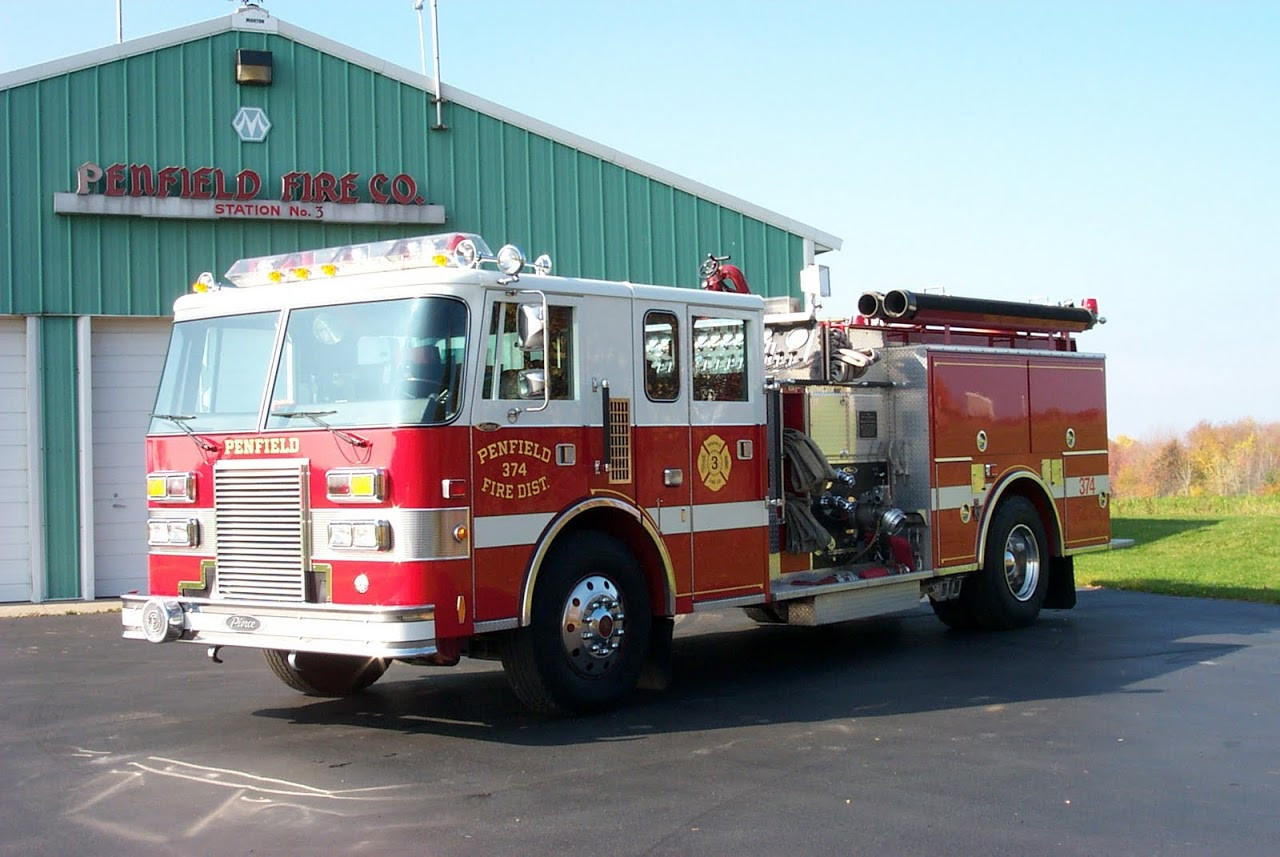 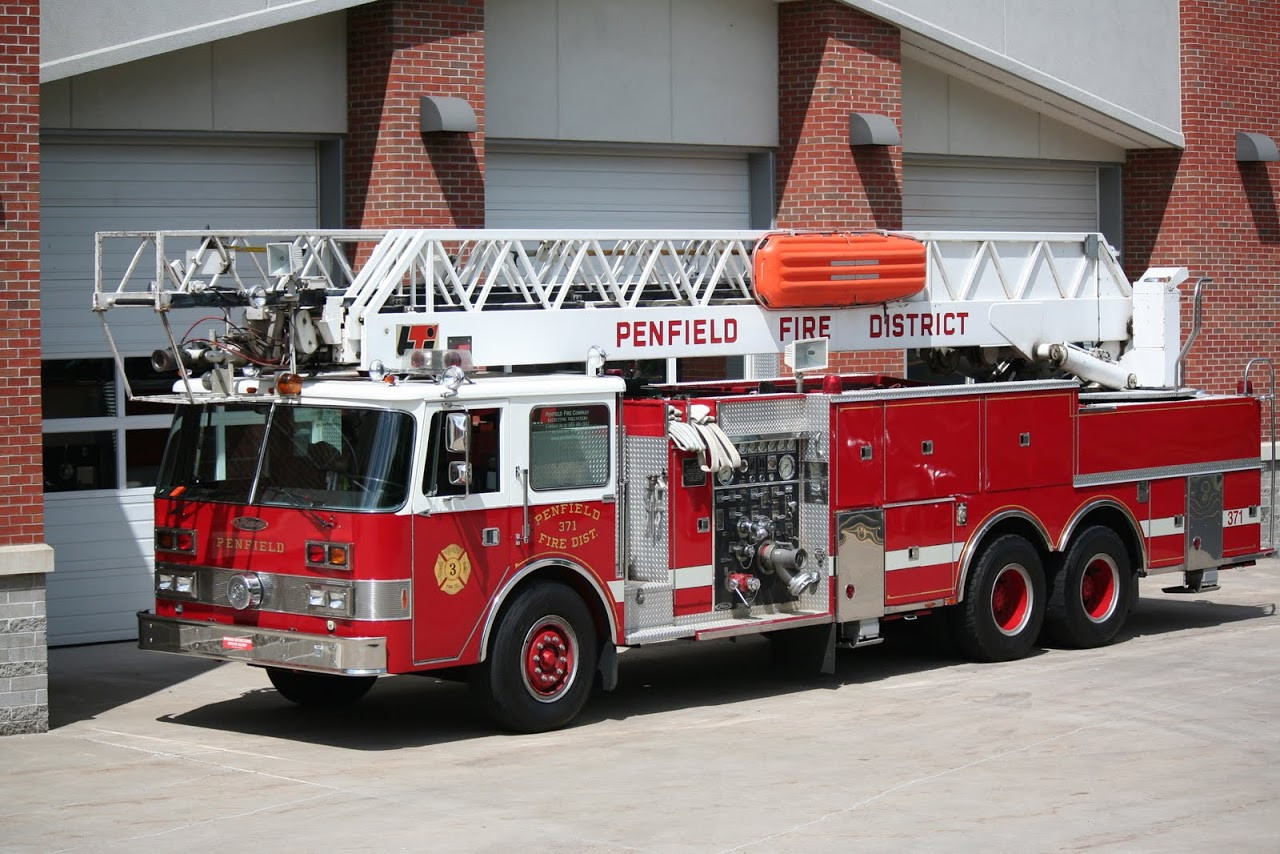 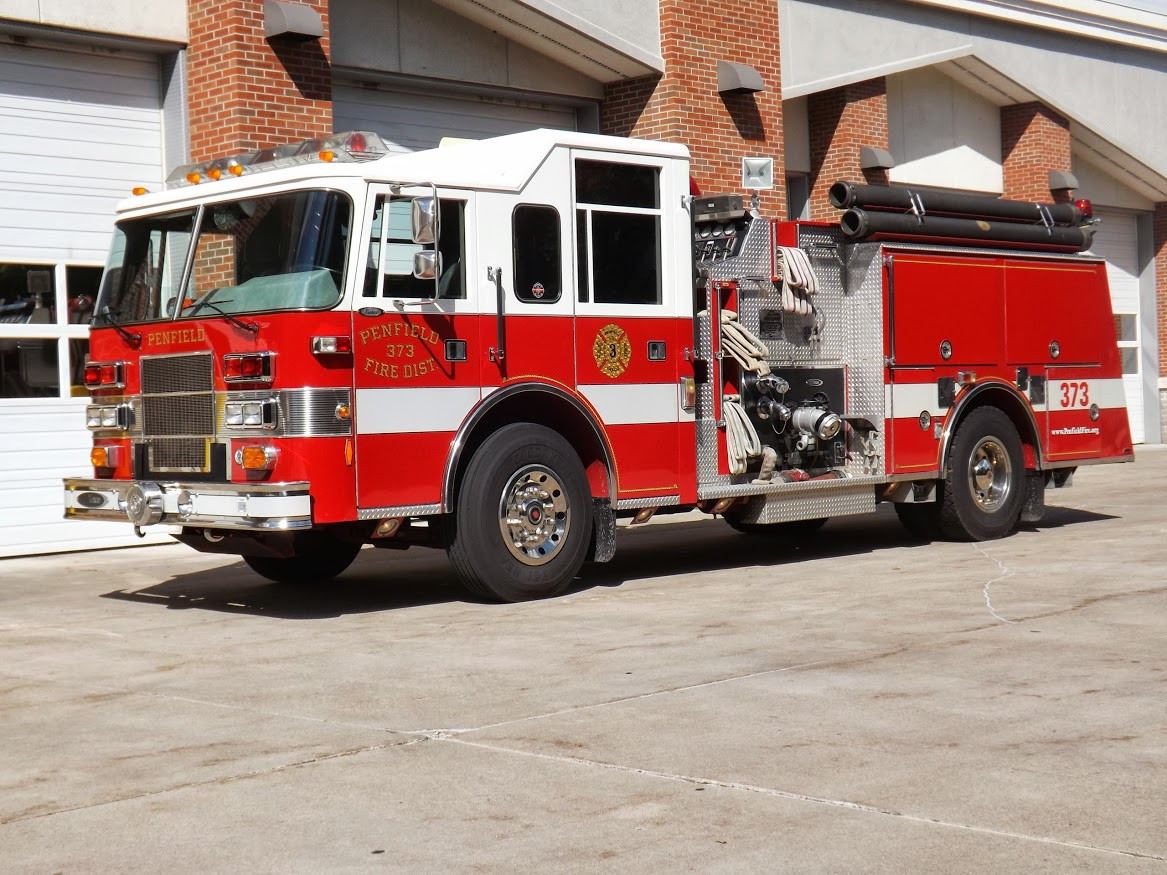 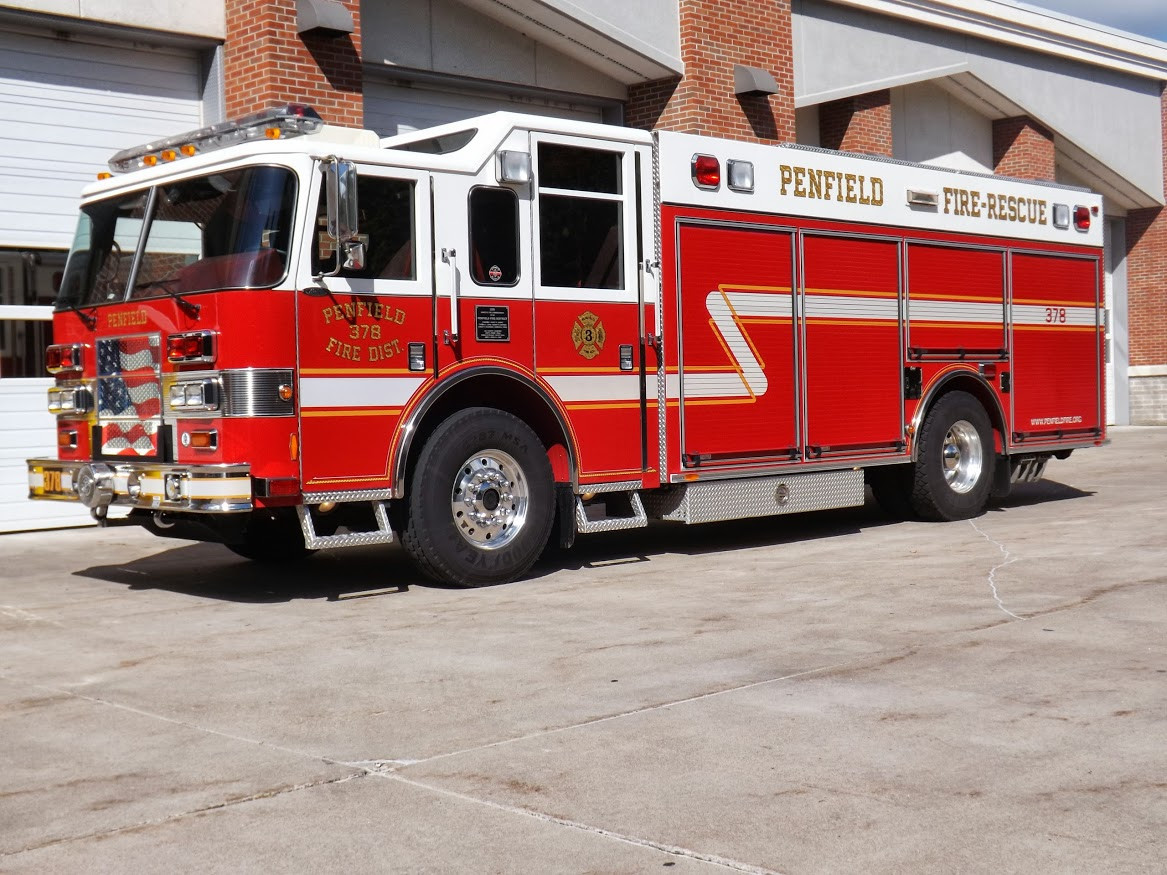 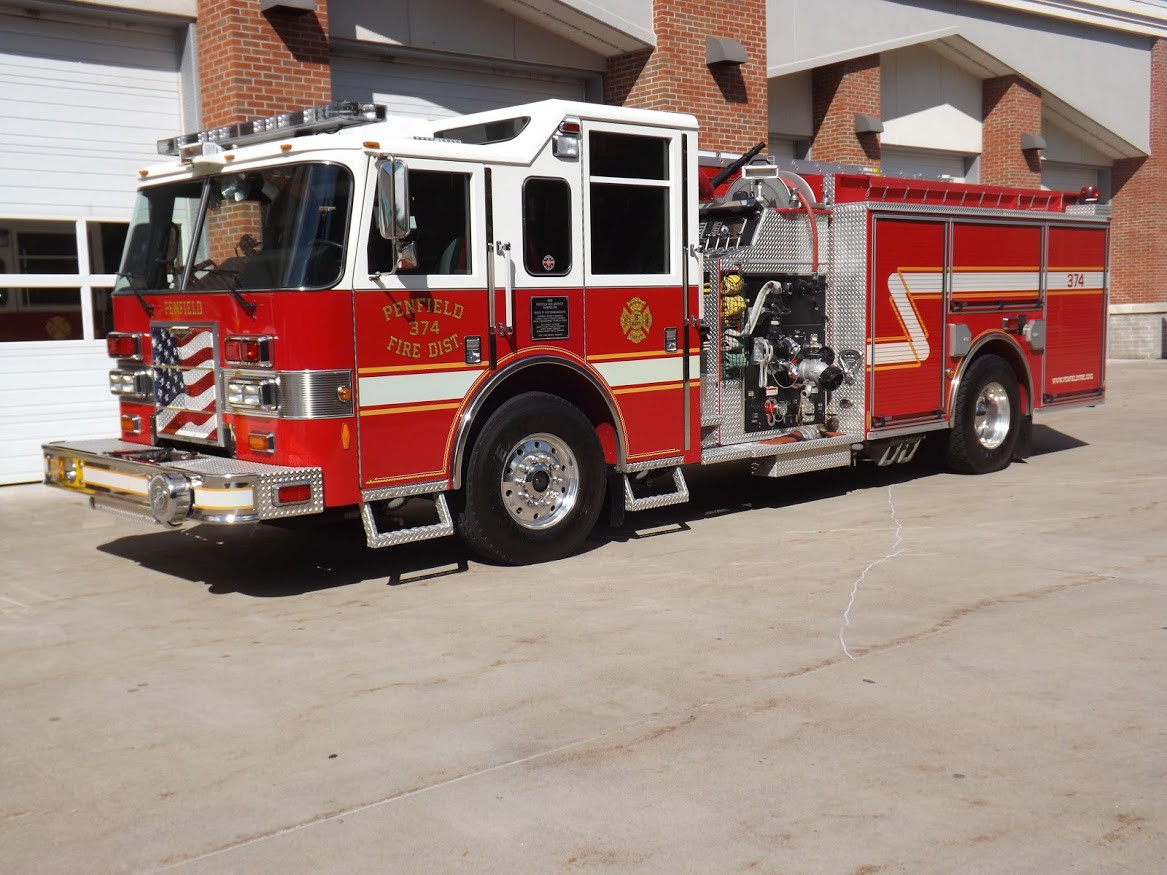 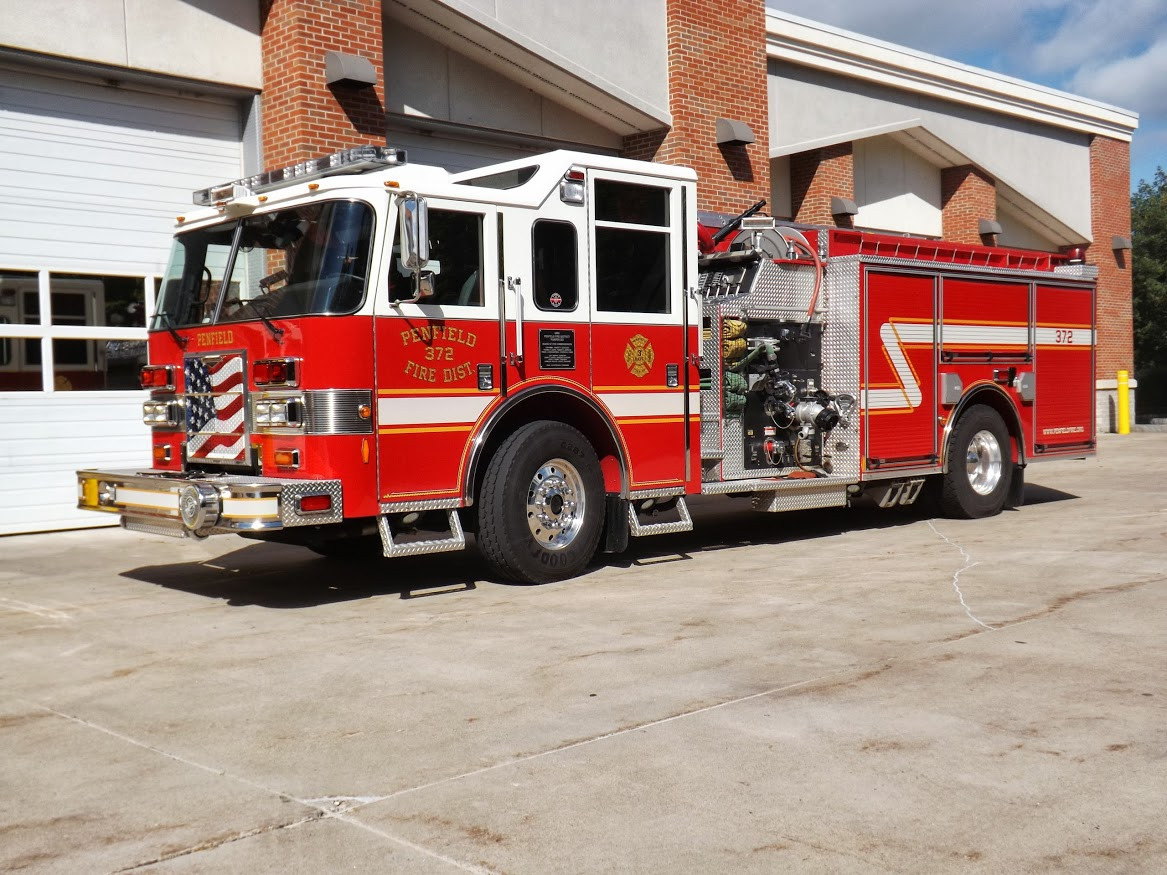 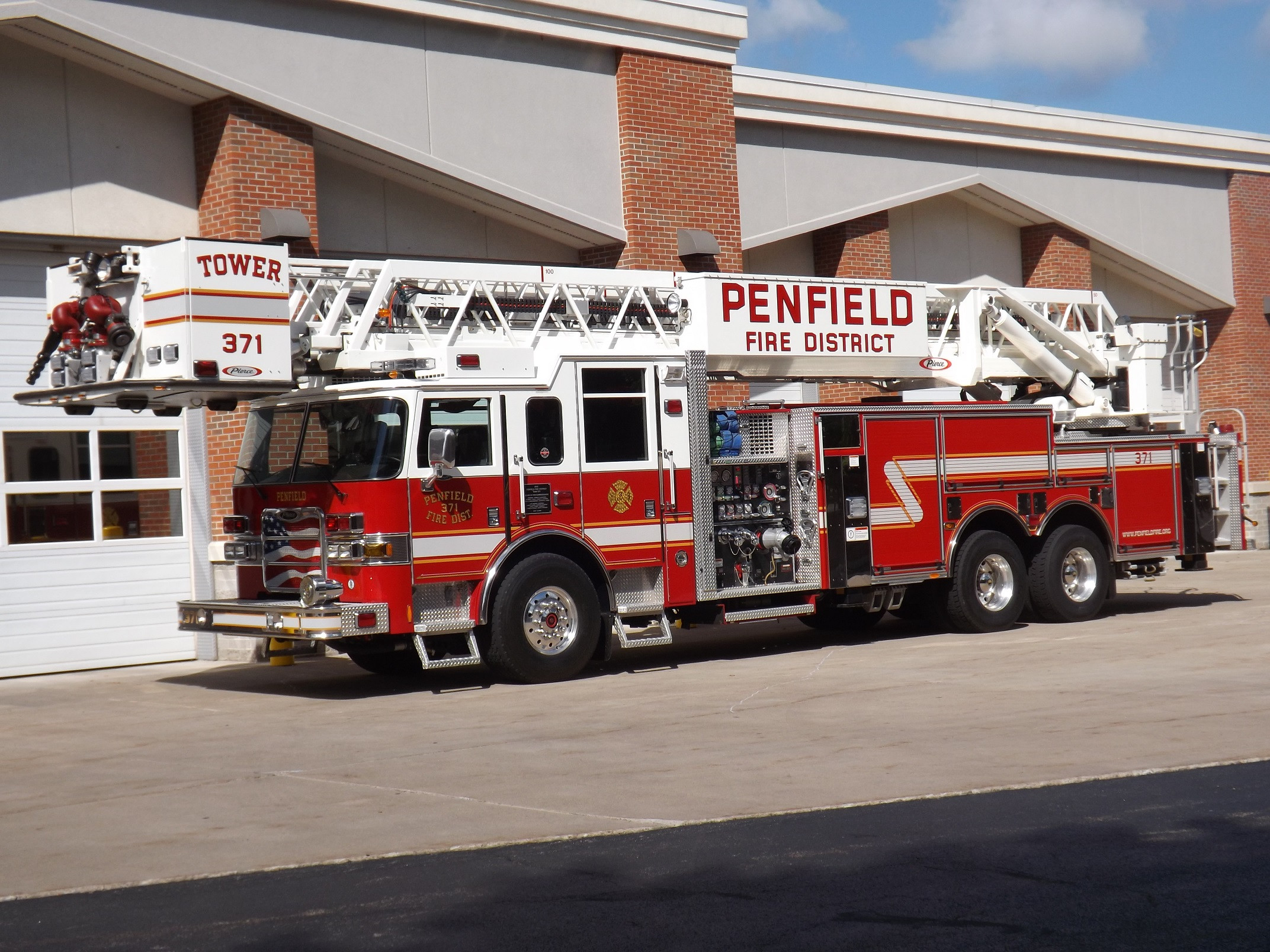 TA 11
1949 1 1/2 ton Dodge
Purchased from Church Motors
The chassis was from Chicago, freighted in and put together by Tom Jones Senior, Len and Ben Bach
250 Gallon Per Minute Darley Champion Pump with a Side Mounted Pump Panel and a 500 Gallon Tank
1949 – 1965
This was the first and only truck to be numbered 11 and was the 5th piece of apparatus.  This is the only known picture of the truck which is the second from the left.  Here is what the fleet looked like in 1954.  Just after the picture was taken the ambulance would be retired and Engine 21 would head out to Chicago have it's chassis put on.  Also you can see the first renovation taking place to station 1

Engine 74
A 1949 Mack International, sat in a show room for 2 years prior to being purchased by Penfield ($15,118.25)
Mack Thermoline Engine
750 Gallon Per Minute Side Mounted Waterous Pump
200 Gallon Tank
1952 – 1973
6th piece of apparatus - first piece of apparatus to be numbered 74 making the number "74" the oldest number carried across the fleet.

Engine 21
Chevy 6400 2 Ton Pumper
Purchased From Hoselton by the Fire Company and Presented to the District.
The whole truck was sent to Chicago for the chassis from Darley
500 Gallon Per Minute Side Mounted Darley Champion Pump
300 Gallon Tank
1954 – 1965
7th piece of apparatus - first truck to be numbered 21

Emergency Car M17
Chevy 3800 1 Ton Emergency Open Box Car
Purchased From Hoselton by the Fire Company and Presented to the District
The chassis was put on by the Rochester Mayday Equipment Company
1956 - 1973
8th apparatus, first and only truck to be numbered 17.
This was one of the only Penfield Fire Trucks ever to be requested to the city of Rochester for a fire.  It was sent to the scene for usage of it's spot lights

Rescue Pumper 374
Custom Young Crusader Pumper
1000 Gallon Per Minute Dual Stage Side Mounted Hale Pump, 500 Gallon Tank, 4000 Watt Generator
The engine was swapped out in  Fall/Winter of 1979 in Albany replacing a gas engine with a diesel engine.
Compartments refurbished in C. D. Murray in Hamburgh Completed in February 1988
1971 - 1990
12th piece of apparatus, second truck to carry the number 74 now modified to 374, a classic truck that is still talked about today

Ladder 371 (AKA 370)
A Custom Pierce Arrow purchased from Churchville, Detroit Diesel 330 Horse Power Engine, 1500 Gallon Per Minute Single Stage Side Mount Waterous Pump, 6000 Watt Generator
March 1983 – 2010
17th apparatus, first ever ladder truck for Penfield.  It started it service out as the second truck to be numbered 370 but was later changed 20 years later when a second ladder was purchase.  The 1983 ladder would also be the second truck to be numbered 371

Rescue 378
Pierce Saber Cab, 330HP Caterpillar Engine, 25000 Watt Generator, 12 Foot Light Tower.  This is the second rescue the district has owned, it's the second truck to ever have the number 378 and is the 25th piece of apparatus ever owned.
In Service from March 2006 to June 2017

1/2 price Appetizer just for Signing up!
AND Get a FREE Sundae on your Birthday!

Please send me my coupon today!

NO THANKS, I PREFER TO KEEP BROWSING